I will tell you, there is nothing quite like thousands of women and men shouting the English word “bullshit” all in unison!  No… really!  Especially, when this is done with strong Italian accents, it really makes you smile, and feel proud to be an English speaker! 🙂

Women's Demonstration against Berlusconi & the Government (2.13.11)

Okay, there were many other reasons to feel quite proud today, and they had nothing to do with being an English speaker.  They, however, had everything to do with being a woman!  Yes, that’s right!  The women of Italy must have heard about me complaining in my blog, or somehow psychically felt my ever-growing disgruntled pms-ing energy pervading the universal ethers (because everything is really all about me – No, really, I know! 😉), and decided to show me that the women of Italy knew what was up!  And what was up was their dander!

The very same thoughts that I have been sharing over the last few days about my observations on the behaviours of Italian men, or at least the structure of the Italian patriarchal society that so highly influences its men’s behaviours, was being reflected back to me by these angry and highly organized as well as mobilized women!  They shouted for respect and equality!  They asked not to be seen as just sexual objects to be used and abused by men such as Berlusconi, the current Italian president.  They asked for all Italian women to be united and to stand up for themselves, and to demand their place in society, rather than be treated as second-class citizens! 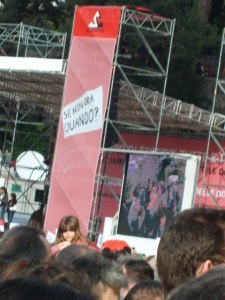 I was amazed, dumbfounded, and humbled.  I realized that I have had the misfortune of only having had the acquaintance of Italian males, and did not understand at all the experience of the average Italian female.  In my independent, liberal-minded, feminist, American arrogance (Yes, I said, “arrogance,” because it was true.), I had made the assumption that the Italian woman was okay living in this system, and had quietly acquiesced to her place of submission –  I was wrong, and am truly glad for this discovery.

What is equally amazing is that I would not have known anything about this demonstration had it not been for a man.  Enter Giuseppe: a politically-minded, middle-aged, professional.  He along with a number of many other Italian males were participating actively in the demonstration and screaming and shouting along with the women, and applauding the female presenters!  This was highly encouraging to see.  After all, up until this point, I had all but decided that Italian men were… well, let’s just say, not quite enlightened.

The cynic in me, of course, is always able to point out the many people who are, what I call, “token” activists.  That is, they come to a demonstration here or there, but otherwise do nothing, or actually do everything to thwart whatever the movement is.

These “token” activists are able to say, however, that they believe in the movement because they went to a demonstration.  It is like people who say they do not exhibit any racist behaviour because they have minority friends, yet still they may make stereotyped commentary about minorities (all under the guise of “It’s just a joke.”)

I suppose this is my fear –  That these men might just be “token” activists,

and do not actually believe in the cause, or will not actually do anything to help the women further it.  That these men, in essence, are there just for lip service and to be a “token” display of gender alliance. Well…  I will choose for today to look at the glass as half-full however… and be happy for these women, and happy for myself too, to have been witness to this event.

It is not lost on me that the women chose to hold this event on the day before Valentine’s Day… Especially as I have been told, Valentine’s Day is not much celebrated here. 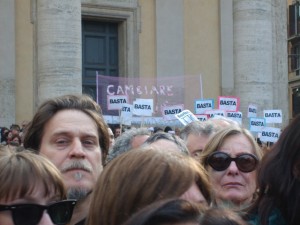 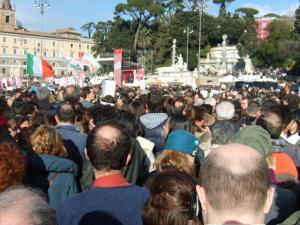 5 thoughts on “Just when I thought hell would have to freeze over… Demonstrations in the streets!!”