Ah…. Love.  It gives you that warm and fuzzy feeling in the pit of your stomach… kind of like menstrual cramps (For the men out there, think of a bad bout of the stomach flu – It’s basically the same thing.)  By the way, just for the record, my sister, Michelle, told me this morning I was a bit of a cynic.  Though for the life of me, I cannot fathom why!  Now on to more truthful statements. 😉

Yesterday I thought I was emitting pheromones.  It turns out that I wasn’t far off, because today I discovered the source of the pheromone-emission: Piazza Navona.  That’s right!  With its centrally located and overbearingly phallic Bernini fountain shooting sprays of water for all passersby to enjoy and be potentially sprinkled by, Piazza Navona acts as some type of Roman pheromone repository to be accessed just in case the sexual tension eases even ever so slightly in the Eternal City.  And apparently with my arrival, the heaping amounts of asexuality that I normally drag around with me like an untamed and hungry elephant (I had to trade the lioness in – She really didn’t take up quite the right amount of space and didn’t cause nearly enough damage.) was just enough to set off the alarm bells from Campo dei Fiori to the Piazza di Spagna.

Thus, upon my first visit, my asexual powers were neutralized as I stood (like any good tourist would) close to Gian Lorenzo Bernini’s Fountain of the Four Rivers aka Fontana dei Quattro Fiumi (that’s right… four) to take a picture!

My subsequent visits only resulted in a type of dousing that has left me… Well, you know already… (And if you don’t, then read the last post and catch up!)  By the way, there are three fountains in Piazza Navona: one on either entrance (Fontana del Moro, located at the south entrance & Fontana del Nettuno, located at the north entrance; both by Giacomo della Porta) and then the above-mentioned granddaddy of them all.  So, truly, there is no getting around the pheromone emissions, ladies… So, deal with it and carry a fly swatter, or a baseball bat, or a can of mace – Whatever your fancy… Unless you like the attention.  If you do, then have at, because the men surely will!

Welcome to Piazza Navona... and it's fountains. (South entrance)

Fontana del Nettuno, "Fountain of Neptune." Honestly, I wouldn't mess with him... Just spray me with pheromones already! Especially, if you're going to be all weapon-wielding and testosterone driven. Sheesh! (Piazza Navona)

Fontana del Moro, "Fountain of the Moor." So, I am less intimidated... but still, every orifice something pouring from it... (Piazza Navona) 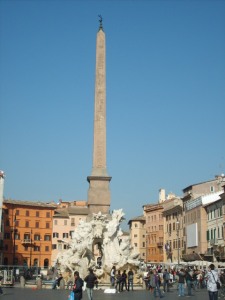 Ahem, but actually, this section was about love… That’s right! The warm, fuzzy, yada-yada…(and I never watched an episode of Seinfeld in my life)… Couples, couples everywhere and evidence of breeding to spare!… This was the situation in Piazza Navona (and I have the pictures to prove it)… On the one hand, in the overcast gloominess of the morning, it was sort of sweet (in a cloying way) to see these happy young and old couples walking hand-in-hand, pregnant women, and children playing… After about 30 minutes though, I was quite sick of the public displays of affection (PDA).

Love is in the air... (Piazza Navona) 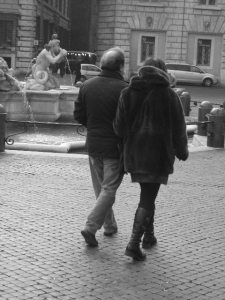 Love, all grown up!

And then, of course... (Piazza Navona) 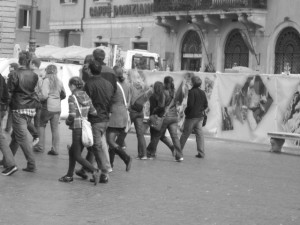 Not even the next generation is spared... (Piazza Navona)

I know… You might wonder, “D, why can’t you just appreciate and enjoy the wonder of love?”  Well, I guess, as I said above, I did… for a brief moment.  It is, however, things like the following situation that just kind of… well… kill it for me.

So, I mentioned yesterday that I had been accosted by no less than 4 middle-aged Italian men.  Of the four, I found that one seemed relatively harmless, and didn’t speak a word of English – Ciao, Vincenzo!  Thus, I thought, “Aha!  Here is an opportunity to practice my non-existent Italian… And if I need to (in case he turns out to be more on the strange side of things), I can always simply just start speaking in English while slowly backing away.”
I met Vincenzo at the Piazza Navona in the latter part of the morning to take a walk around Rome and to see the sites (Vincenzo is visiting from another part of Italy).  When we reached the northern entrance of the Piazza, Vincenzo suggested that get a cup of coffee at one of the many gelatarias/coffee shops to be found in the area.  This one happened to be right at the north entrance – I tell you this, so that you can go there one day.  Upon entering, I was instantly attracted by the colourful display of gelato (What?  I am not stupid!  This is gelato we’re talking about!)… Now, when I say that after this experience, there is nothing else in Rome that can surprise me, I really mean it.  I mean…  If this does not tell you about the state of the patriarchal structure here in Rome, then I don’t know what will:

I made this picture quite large because I know the quality isn’t the best.  Um, but I think you can make out the word.  Now, I have never seen Viagra pills in my life, but apparently they are blue – Isobel informed me of this later on the day.  So, here it is… A blue gelato called “Viagra.”
I know how to speak in Italian. (Io so come parlare nell’italiano.)
It wasn’t enough for me to simply see this gelato and leave well enough alone.  No, I had to talk to the shop manager, who was quite a lovely lady and who also did not speak a lick of English.  Well, I am not sure how I managed to find my dictionary so quickly, however…  With the aid of my handy-dandy Berlitz Italian-English Dictionary, I was able to have a conversation with the manager about this Viagra gelato.
The conversation went something like this:
Me: “Um… This is Viagra gelato?”
Manager: “Yes.”
Me: “Why?”
Manager: “I don’t understand what you mean.”
Me: “What is the meaning of this ‘Viagra’ gelato?”
Manager: (laughing, turns to male customers) “She wants to know the meaning of “Viagra!”
(A great deal of Italian chatter and laughter then ensues amongst the men.)
Me: “Yes, why do you have a Viagra-flavoured gelato?”
Manager: (Still laughing) “For the men, of course!  They need to have Viagra gelato!  It is good for them”
Me: “Um… I will have to let the ice-cream shops in the U.S. know about this then. Thanks!”
Manager: (Smiling) “You’re welcome!”
And so now I believe… sometimes… just sometimes, it’s better to not know… and I will remind myself, every now and then, to simply to leave well enough alone! 😉

6 thoughts on “Rome is in-love… with Viagra. Plus, who knew? Io so come parlare nell’italiano.”