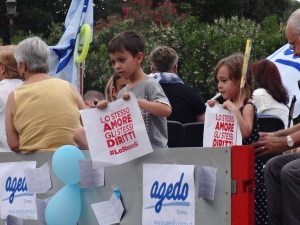 Saturday, June 13th, was Roma Pride March. Since 1994, Rome’s lgbtq community has celebrated Pride Week.  Thousands came together to take over the streets, including representatives from major companies, such as Microsoft. It was truly an inspiring day and is another reason why I love Rome.

Disclaimer:  The following thoughts are simply my own.  I do not and cannot speak on behalf of any particular group.  These thoughts also address issues concerning weight fluctuations and its impact on self-esteem.  If this type of topic causes discomfort, please do not continue reading.  It took me a great deal of time to decide to address this issue…and thus, I do not do so lightly.  I only hope to share some of the experiences in my life journey that have brought me to this point of whom I am, i.e. a person I love most dearly.

Since childhood I understood something quite clear about the value of hair as a woman. Perhaps it would be better to state, “as a Black woman.”

I understood that the relationship I would have with my hair would be one of constant struggle.  I watched my mother, my sisters, aunts, and friends go through the battle of having to straighten their hair.  Not only that, some even went to task of getting weaves, whether by sewing or glueing.  All in an effort to have that ever-coveted “long, flowing, hair.”  I didn’t understand it then, and it some ways I still don’t.

I only knew that,between my mother’s desire for me to grow my hair long and society’s expectation for me not to look androgynous, I could not cut my hair.  Well…that was until I turned 15. 😉  What changed?

Well, I began to embrace my sexuality.

While still living in Jamaica, at the age of 11, I knew that I was “different.”  I write “different,” because at that time, I did not know the word “lesbian.”  After all, I grew up in a highly patriarchal and homophobic society, and had beenand  attending all-girls Catholic school for some years as well as living in a convent–even though that last point might make you wonder how I hadn’t learned the word.  But enough kidding around.  Seriously, I had no idea.  I simply knew that I liked girls better than boys.

At the age of 13, I did have a pseudo-boyfriend…I suppose because it was expected of me.  Still, I didn’t feel the expected spark or any type of magical feeling when I thought of or spoke with him.  Of course, that would all change after I moved to America and met my first girlfriend at the age 15.

You see, when I moved to Florida, I was still struggling with my relationship with God/the Universe and my growing understanding that I was “different” (a.k.a lesbian).  I spent time studying with the Jehovah Witness, the Mormons, and even the Moonies–yeah, I was that serious! ;).

I wrote letters to Catholic organizations, and even received a heartwarming pamphlet called “Pastoral Care for the Homosexual,” which basically told me that God/the Universe didn’t hate me, I just needed to remain celibate for the remainder of my life.  Right.

After lots of studying, writing, many tears, I decided that these Christian religions had it all wrong.  I believed, rightfully so, that God/the Universe doesn’t make any mistakes…and God/the Universe surely didn’t make one by creating me.  So, I cut my hair…

Wait…I know it may seem like a leap.  But you see, I was ready to claim my sexuality.  I was ready to shed the heterosexual norm that had been dominating my existence up until that point.

You see, I had somehow zoomed my way through Cass’ Sexual Orientation Identity Formation Model:  going from identity confusion to identity pride.  I cut my hair, donned some flannel (see above picture), bought Melissa Etheridge cassettes/CDs, learned Indigo Girls songs on my guitar, started pointing out every lesbian I could to my mother, cut out every article I could find about lesbians and/or lesbian life, signed up with various Youth LGBT organizations, and even began volunteering at L.U.C.H.A (an HIV/AIDS Care Centre).  You get the picture.

With my decision to walk away from my Catholic/Christian faith, I no longer felt the need to pander to societal expectations.  I didn’t have to concern myself with what it meant to be a “woman” or even a “Black woman” per se, because it seemed to have very little to do with me.  I had simply to work on creating me, a “me” not bound by any restrictions of heterosexual society.  In essence, I became a social” nomad, without a sense of belongingness.

At that young age, I hardly saw images of lesbians beyond the famous ones, singers and politicians.  I didn’t see images of young lesbians like myself.  If anything I understood that the lesbian community had long modeled itself on the heterosexual community, i.e. of having dominant/submissive role relationships a.k.a butch/femme.  Of course, please understand, that that was in 90’s and also my exposure to the LGBQT community was very limited prior to going to university.

So, what does any of this have to do with weight?

Well, the reality was (is) that in my household “long hair” was not the only concern, “being thin” was too.

References to how thin someone was or should be was a constant in my life growing up.  Furthermore, I happened to be the tallest girl in the family as well as the thinnest (a result of both nature and nurture).

My weight was constantly observed and lauded (alongside my academic achievements).  It is no wonder that there was and still is such a huge distance between my sisters and myself.

Being thin, however, had its advantages for me being a young lesbian.  I wore masculine clothing with ease.  I could look and was androgynous when I chose.  I was more able to attract the attention of other young lesbians (whether out or not).  In other words, I had chosen to externalize my sexuality in the most obvious way.

Again, this refers to that time and I am not saying that sexuality can only be externalized by dressing androgynously.

At the age of 17, I entered Stanford University.  In a span of a year, I watched my hair grow by the miracle of extensions (braids), my academic abilities plummet, my weight increased by double digits, and my overall self-esteem shatter in fragments so microscopic that I was certain that I would never recover those pieces (which ended up working out okay after all…because that wasn’t actually self-esteem).

I returned home at a weight that I consider to be still below average.  I was hardly overweight.   The result of this gain, however, was the gift of my being signed up to take personal training sessions at a local gym.  I went once or twice to appease the powers that be.  Then I did the next best thing:  I ran away.

Well, not really.  I simply chose to spend a good portion of my summer vacation away from home.  And I continued that practice all throughout college.

Interestingly enough, it was also at that time (after coming out to my mother on a cross-country road trip from California to Florida) that I decided to keep my extensions and try giving the heterosexual dating thing a try once again.  And I did…to spectacular failure.

Many, many awful things happened that are best left undiscussed at this point.

The result was that by the time I returned to being true to myself, the damage that I had inflicted upon my body was quite severe.  Thus, in the span of three years, I had gained upwards of 60 pounds and the number kept climbing up to and beyond graduation.

I wore braids until mid-October 1999.  I was living in Berlin at the time and my study abroad program had travelled for the weekend to Weimar to visit the city as well as to see the Buchenwald Concentration Camp and the Bauhaus School of Art and Architecture.  It was during that trip that I decided to remove my braids and let my semi-formed loc’s embrace the air and light of day. 🙂

It was the best feeling in the world, i.e. letting go of something that was not naturally a part of myself.

My hair had grown long enough for me to be able to manage it and I was excited to see what it would do and how it would grow.

After graduating, as I stated before, my weight had already taken on a life of its own.  I failed to take responsibility for it, using it instead as an emotional shield to warn people away from me.  I decided then that I would do whatever it took to return to a healthy physical state.

Just as in my teenage years, I felt I had the freedom then to reinvent myself.  And it would not be the last time.

In 2002, with the help of my eldest sister, I started working at fitness club.  First, I started just as a desk attendant, but was happy to take tips from the trainers and also to have free use of the equipment.

In time, I became a personal trainer, fitness instructor, and a spokesperson for the fitness club.  I became a fitter and healthier version of my former self.  I was neither the thin/fragile-looking teenager, nor was I the heavy/tired-looking college student.

2004 I entered graduate school with my hair, body, sexuality, and self-esteem intact.  How I would leave it…that would be another thing.

All the discipline that I had learned while working as a trainer were tossed to the wayside and replaced with the discipline of study and working full-time to make ends meet.  My long-time girlfriend from Florida had moved with me to Boston and our relationship grew further apart the more I worked and studied…until it finally dissolved.

In 2006 I graduated, and was elated to find myself already employed and dating the woman who would later become my life-partner, April.  My health was steadily deteriorating just as steadily as my hair was growing.  Finally in 2008, I was diagnosed with Fibromyalgia; and April and I married.  It should have been the happiest day of my life.  It wasn’t.

The night before my wedding had found me in the hospital, barely able to move, and suffering unbelievable amounts of pain.  My wedding day was a medicated fog tinged with worries about the final details and dealing with family concerns.  My weight too had been skyrocketing.  Eventually by March 2009, I would reach my highest weight ever…193.  What happened next would change my entire life…