So what happened after March 2009?

I decided enough was enough.  I was sick, tired, self-pitying, angry at the world and at myself, and just generally feeling that I was inadequate that my existence was quite pointless.

I wasn’t able to participate fully in either my personal or professional live.  It was hard.  When I looked in the mirror, the image smiling back at me was still sad.  I decided then that neither Fibromyalgia nor my mind nor my surrounding was going to stop me from finding a way to live.

“Not the self-destruct button” found at http://www.connectedprincipals.com/archives/4100. I had to include this image… It was just too funny not to do so.

I decided to do what I could do…take one step forward.  I joined up with two other ladies to do a walk/run for 15 minutes for most mornings.

I decided to do Weight Watchers Online for three months to learn more about nutrition and to be inspired by others who were taking positive steps to make effective changes in their lives.

I decided to become vegetarian, slowly (and I mean very slowly) removing meat products from my life.

I decided to begin learning how to love myself as I was in that moment, not lament who I had been.  I wasn’t always successful, and sometimes I still struggle with that.

I acquired the following books:

I decided to become more natural with my medication, finding ways to decrease the amount of medications that I had to take.  It took consulting with my doctors and taking time to research, but it was worth it.

I temporarily joined a Fibromyalgia Support Group (though I did not always find it supportive, especially when it came to improving my physical health).

I began to speak out more about my needs and take steps at work to make sure that others understood the nature of my illness. 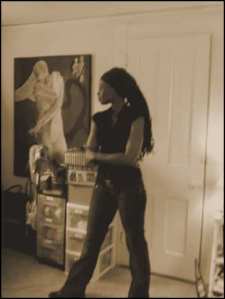 After almost two years of doing this work, I found myself a bit more than 70 pounds lighter.  My blood pressure which was unreasonably high was lower.  My body that I could barely move most days began to move more.  My mind was less foggy.  I began to wake up to many realities of which I was not aware.

Of course, when you go from a larger size to a smaller size, you need new clothes.  I was fortunate to receive some vintage clothing from April’s grandmother, which were more fitted to my figure.  Wearing these clothing turned into gossip that I was trying to attract men…even though these people knew that I was married and highly committed to my marriage.

There was also a humorous side to all of this (actually, I found the rumours humorous too).  I discovered that suddenly people felt more comfortable giving me compliments.  I even had someone say that they were surprised by how good I was looking lately.

Suddenly, too, many people were ready to chime in on my general appearance:  how I should look, what I should wear, what my weight should be.

I guess you could say that losing the weight brought me both joy and distress.  I was happy to be free from some of the physical difficulties posed by my weight gain…but I was equally distressed by the growing hostilities coming from various parts of my life. Still, I do not regret it.

I cut my hair and moved to Rome, which brought on a whole host of other issues, of which you can read about in earlier postings in my blog.