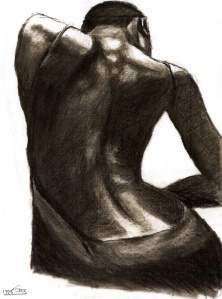 Almost two years ago, I sat on the floor in my bedroom, staring at a propped up full-length mirror.  My eyes were red and stinging from crying.  My ex was staring at me with concern.  I am not sure where the dogs were, and it’s quite possible that they were there too.  It was Thursday.  It was evening.  It was Thanksgiving Day.  It was also the beginning end.October 1999.  Stanford-in-Berlin Program.  It was the day before we left to travel as a group to Weimar to visit Buchenwald and to see the Bauhaus School of Art & Design.  I sat in the darken closet space in the library/loft bedroom that served as my home for a semester.  My hands were moving silently and quickly trying to unravel, trying to untangle the part of myself that was false.

They weighed 2.5 lbs.  My dreadlocks.  Long, black, streaked red, interwoven with the hairs of those whom I had loved and still loved.  I placed them in a large wooden box, buried them with the things that once belonged to that which was now lost.  I buried the box under boxes, the memories hidden from my sight, my head free and light, even if my heart was fully empty.

I shoved the engineered strands that once formed plaits, that once gave me an image of who I wanted to be but was not.  I decided then, thirteen years ago, to accept the image of myself that stood:  dark circled eyes, lips too big, cheeks puffy, pimpled face, brooding, always too hungry and never fully satisfied even after consuming anything and anyone.  I had been living in a vaccuum catering to my illusions and fostering my disillusionment with the world around me.

The screaming voice, terrified in its inaction, broke my heart.  The words did not make sense, but then again they did.  Drop everything and run.  Dropped everything and ran to my car, open the door and drove speedily on curved roads.  It wouldn’t have changed anything.  It changed nothing.  Death happens sometimes in an instant.  There is nothing to be done. Whether it is the warmth of the cooling body that lays still beneath touch of a palm roughed and ruined by age and care.  In absence of signs of either life or death, there is neither hope nor grief. 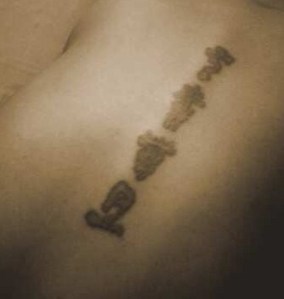 Going against the grain.  It’s what I do best.  After I came out to my mom in 1996 as a lesbian, I immediately started dating men, resulting in memories best forgotten and the decision that all men were bigs…I’ve changed my mind about that…somewhat.  It’s doing the unexpected that make life worth living.  At least, you know that you are choosing and not someone else.So, I decided to resign from my job just when I was eligible for indpendent licensure.  I decided to leave the country that served as my home for twenty-odd years to move to place where I didn’t speak the language, had nothing and no one.  I decided to cut my hair just when I began to recognize myself in the mirror.