Image of famous "....Too Straight" LGB Poster found on http://www.missivemaven.com/

I remember the first time I saw this poster at the Fire Station House (I believe it is now called the “Pride House”) on Stanford campus.  It is quite difficult still to capture in words the precise feeling of joy that the sight gave me.  The idea of these famous people of different races and talents were identified as lesbian, gay or bisexual was beyond belief and tremendously comforting, especially for my then 17 year old self.
I spent my undergraduate years working actively as a member of the lesbian gay bisexual transgender queer/questioning community (LGBQQT… Yes, we tried to cover everyone).  In some ways, I hoped that my work on campus was meaningful and helpful.  For myself it was as it meant doing something for my community and also belonging to a community.
The reality was that back then I did not feel accepted as a part of the Black student community either while in a southern public high school or at Stanford due to my sexuality.  Being Black, lesbian, and highly partial to heavy metal and dressing goth didn’t seem to fit in with what I understood those community expectations to be, which were to be… straight and into hip-hop/rap and R&B (okay, I did some stereotyping of my own ;))  Also,  I never seemed to fit in with the profile of people’s notion of a “Jamaican.”
Apparently, I didn’t sound Jamaican (and still don’t I’ve been told).  I didn’t act Jamaican (this is due the aforementioned heavy metal/goth thing).  I was also a good student and made friends within the non-Black community (this was an issue in high school not college).  All of these factors afforded me the label of “oreo” in high school, i.e. “Black on the outside, White on the inside.”  Teenagers can be so very cruel… and tedious.  Regardless of the critique, I still continued to be my quite strange Jamaican self to this day and am the happier for it.
Coming out…

I’ve never really had to “come out” in any really major ways.  I told my mother I was a lesbian when I was 18, but then proceeded to confuse her by dating men for a year after that.  I also took my first girlfriend to prom in 1995, but that failed to make the headlines in central Florida even though the issue continues to cause scandal in the south.  I guess Poinciana High was ahead of its time, but didn’t know it.

My sisters eventually asked me some years after my coming out to my mother if I were indeed a lesbian, and I believe I answered them.  We are a private family for the most part, and can be evasive in disclosing our personal lives.
From the time I arrived at Stanford in 1995 until… well… last year, I have managed to live a life completely and utterly surrounded by the gay community.  I actually didn’t have any straight friends that I could readily identify.  I could take it a step further actually.  I actually didn’t really have any gay male friends I could readily identify.  That’s right, I have spent a good portion of my adult life surrounded solely by women, primarily lesbians until recently.
Being known as a lesbian has been a crucial part of my identity.  It is something that most people would have known about me within… oh, five minutes of a conversation.  My self-identity was a kind of list that I could state like this, “Hi, I am D. I am Jamaican.  I am lesbian.  I am a confirmed Catholic.  I am Buddhist.  I am a therapist….”  and so on.
I suppose one could say that every conversation was a process of coming out.  In a way that is the lot in life for those of us who are perceived as “different” in some way from the majority of society.
Repeat that???

"Not the self-destruct button" found at http://www.connectedprincipals.com/archives/4100. I had to include this image... It was just too funny not to do so. 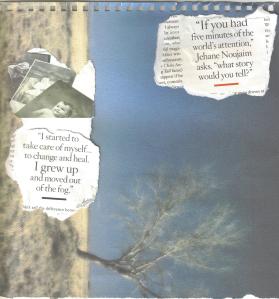 Fast forward some decade plus to my current life.  My ex stated to me, in no uncertain terms, approximately two years ago that she thought that I was straight or interested in dating men.

Now, given the fact that I’ve self-identified as lesbian since the age of 11, the idea seemed quite preposterous.  Even my dating of men at the age of 18 was a complete experiment on my part… and it was an utter disaster-even my mother told me to quit while I was ahead!
More recently as my world has expanded to include more diverse groups of people, I recognize that I am open to dating whomever I please.  Does it mean that I have de-label myself “lesbian”?  Should I now proclaim bisexuality?  Eh, I don’t think so.
I am simply myself.  And to be quite frank, I am quite sick labels in general… and if I must have one, then I will go back to the good ole tried and true “Queer” that was (and possibly is) so popular in California.
Until next time!
Best,
D.

Photographs are by Croatian photographer, Dolores Juhas, whose work has been featured in such magazines as Italian Vogue.  You can visit her website at http://www.dolores-juhas.tk or email her: d_juhas@yahoo.co.uk.  She has her own blog at http://themax.bloger.hr

5 thoughts on “Coming out… Repeat that?”

an open platform for Indie authors

It's the Moments that Matter

Haiku express moments; hailstones are momentary things; frozen in time, they are stored here in the circle's icebox