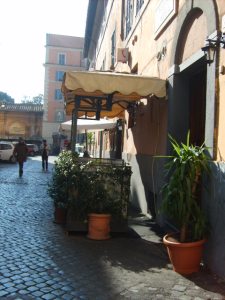 Up until this week Wednesday (the 16th), I have been taking long walks around the city of Rome.  When I say long, I mean like 4 hours long…  I am not quite sure how many miles I have been covering, but I do know I have been enjoying myself immensely!  There would be nothing very special about my walking for long periods of time (especially in my 3-inch heels!) except for one fact:  I have fibromyalgia (FM).

Although the fibromyalgia syndrome has become more well-known over the last few of years, it still remains somewhat of an enigma to the general population.  This is due to the many symptoms associated with the syndrome, the complexity of the diagnostic procedure, and also the continued controversy within the medical field over the validity of the diagnosis – Some doctors like to have a specific “cause” they can treat, rather than dealing with numerous “effects” and uncertainties.  Moreover, the nature of fibromyalgia is that it is chronic, even though many people can live for years in remission.

I won’t go into the details of the fibromyalgia diagnosis. I will, however, give you some highlights as to what the symptoms are, so that you have a fuller understanding as to why I am writing about this today.  The symptoms include, but are certainly not limited to:

So, what does this have to do with my stay in Rome?  Well, everything.  You see, since Tuesday afternoon I have been spending most of my time… sleeping. 😉

I will tell you that the onset of my fatigue coincided with a drop in the temperature, followed by rainfall… and weather typically has a dramatic effect on many people with fibromyalgia.  Also, many people diagnosed with fibromyalgia may also have a comorbid diagnosis of seasonal affective disorder (S.A.D.), amongst a host of many other diagnoses… (see above links).

As a person living with fibromyalgia, especially as a therapist, it is important to incorporate self-care into my daily schedule.  Moreover, it is important for me to be mindful of how much energy I am expending, how much stress I am experiencing, and above all to keep my mood elevated.  🙂  So, what’s the point, D?

The point is that while I was in Boston, I could hardly walk down my street, or really do any physical activity without feeling extremely tired and being in pain.  I often woke up feeling tired, nauseous, in pain, and sad.  There were probably many factors that played a role in my experiences (like… well, Boston decided that a snow storm every week was really the way to go…).  Upon arriving in sunny Rome, I found that all of these symptoms seem to fade away.  I had boundless amounts of energy, was never nauseous, had no pain, and my mood was great!  Well… Until this week. 😉

You see, the thing with fibromyalgia is this – You have these moments when you feel amazing as though everything is okay with you, that your brain and body are actually functioning in the way that they ought.  When you have these moments of remission, it can create within you a feeling of self-doubt.  Why?  Because you begin to doubt whether the pain, the nausea, the sadness, and the fatigue are real…  That is, whether or not you are truly experiencing these symptoms or if you are merely being psychosomatic, especially because, as I mentioned above, there is no known/verified cause of fibromyalgia.

When you experience a significant relapse (and the likelihood that you will may be pretty good depending on your lifestyle), it drags you back down to your reality, which is… that you are a chronically ill person.  Yes, it confirms that you are not crazy… that you are not making your symptoms up, and that they are real!  It, however, reminds you that you cannot live life as though you do not/may not experience these symptoms ever again.

Thus, here I am… a bit tired, a bit in pain, a bit sad, a bit nauseous… Just a bit.  This week has been a reminder for me that I didn’t leave my fibromyaglia behind me once I stepped off the airplane upon my arrival in Rome.  This week is a reminder that I am still who I am in some ways…  I am still a person with fibromyaglia, who needs to take care of herself.

I love “The Golden Girls.”  This is not a result of the new Betty White craze.  From a very young age, I enjoyed watching the show because of the wonderful acting, brilliant writing, and important themes.  As an adult, I have continued to watch “The Golden Girls, ” and was presently surprised to come across a two-part episode titled, “Sick and Tired.”  The episode chronicles Dorothy’s experience of dealing with chronic fatigue syndrome (CFS), which is a similar diagnosis to fibromyalgia (FM) – Actually, many people with fibromyalgia are encouraged to receive a primary diagnosis of CFS in order to receive disability, because FM sufferers are often denied disability.  Back to “The Golden Girls.”

The first time I watched this episode, I was overwhelmed by emotions because of my own struggle with being diagnosed with FM.  I had been suffering for years with many symptoms, from migraines to immense fatigue.   I had been told by doctors that perhaps my problem was that I was “overweight,” or that I “didn’t drink enough water,” or that I “needed more exercise.”  No doctor, it seemed at that time, was willing to help me put the puzzle pieces together… And all the while, I became sicker and sicker, constantly getting colds, constantly feeling pain to the point that I could not walk, and being so tired that I could not get out of bed, even lifting my head felt like a chore.  It took the wisdom of my therapist and (randomly enough) my dermatologist to help me begin sorting through what was happening to me… To give me a name for what I was experiencing.  And more importantly, to validate me and my stated symptoms, and thus help me to validate myself.  So, if you have a chance, take a look at this episode.  I think you can see most of it on YouTube.  You may never know when you may meet someone like me… who may have a diagnosis that isn’t readily apparent, and not easily understood.

6 thoughts on “Rome… Rain… Rest… and The Golden Girls”